From Piraeus to Lyndhurst, N.J.

One of the most notable import companies of famous Greek products is Loumidis Foods, which is based in Lyndhurst, NJ. It is one of the largest companies from Greece, along with Fage and Mega Yeeros, to successfully transition to the United States.

We met with the company’s President, Mr. Sotiris Loumidis, and his two sons, Jason and Kimon, at the company’s facilities in New Jersey and asked them to talk to us about the history of the internationally known products and the activities of the Loumidis Foods company.

They welcomed us and gave us a tour of their offices and warehouses. We were impressed by the modern environment, the organization, the state-of-the-art machinery and the freezer and cooler facilities for the products. We felt particular pride to see trucks loading imported Greek products for distribution on the market. 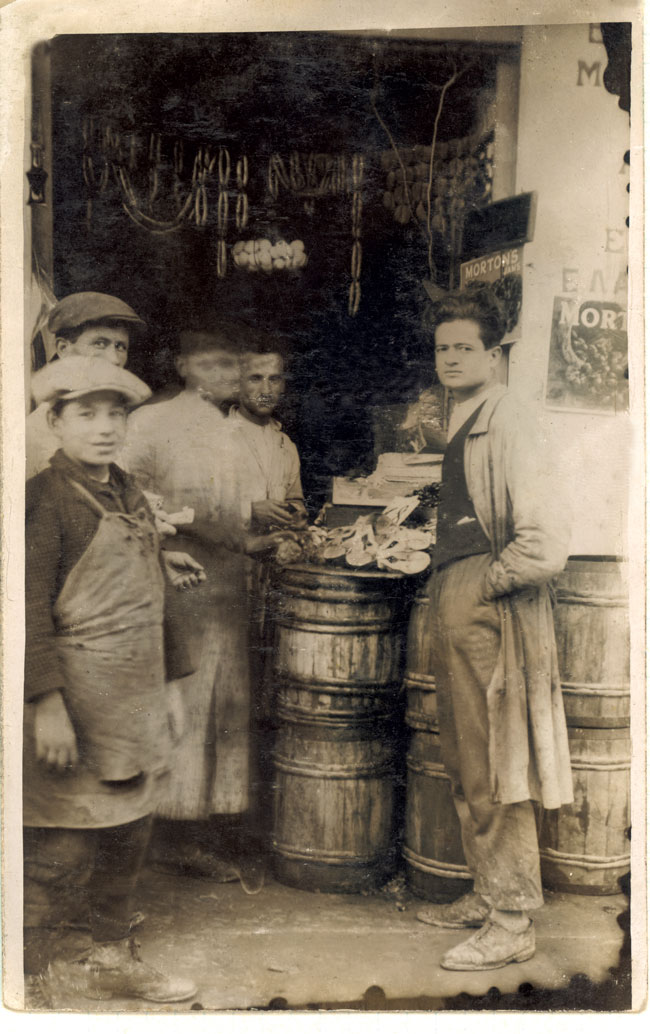 The first little store opened in 1920 on Retsinas Street in Peraeus by the three Loumidis brothers. Jason Loumidis, father of Sotiris Loumidis, at right.

– How did the Loumidis Coffee company begin?

– The history of the Loumidis family begins in 1920 when the three brothers, Antonis, Nikos and Jason, left their home town of Karistos in Evia for Piraeus, without any funds, with limited literacy skills, but with many dreams and a great desire to work.

It all began with a small “general store” on Retsina Street in Piraeus with all sorts of items that naturally included coffee. They devoted themselves and loved this product so much that in a few years, due to their diligence and work ethic, they were able to make their brand name “Loumidis” synonymous with coffee.  “Each has a specialty, that of Loumidis is coffee” was one of the most successful slogans, which is still alive and timely even today.

The war and the German occupation temporarily suspended the company’s upward movement, forcing them to start all over again. The store in the Chauteia section of Omonoia, the shop on Tsamadou Street in Piraeus, the shop in Thessaloniki and the famous “attic” on Stadiou Street were the starting points for the spectacular progression.

– How about the Loumidis chocolate?

– The founding and operation of the Loumidis chocolate and cocoa factory was another big step that coincided with the Loumidis second generation becoming active in the businesses. Two new large investments, the coffee factory in Oinofyta, Voiotia, and the office and warehouse complex in Metamorfosi, Attica, will complete this effort.

The adverse economic and social conditions that followed will force the company to collaborate with the multinational company NESTLE. Sotiris Loumidis assumed NESTLE’s commercial management for Greece and Cyprus and later took over as president, until he stepped down in 1992 in order to continue his professional career in America.

– How did you start in America?

– The opening of a small office in Flushing, New York, marked the beginning. The “Papagalos” and “Nescafe” coffees were the first products that the new company, Loumidis Foods Inc., imported from Greece.

With a specific goal and a well-designed effort, Loumidis Foods makes its presence felt in the U.S. market. Over recent years, it has consistently participated in the Fancy Food Show, with particular distinctions, and does not miss the opportunity to promote itself at specialized food exhibitions. And, of course, visitors to the show this year will find us at Booth # 1470. The extensive range of products and impeccable distribution have now established Loumidis Foods as a trustworthy supplier for the Greek restaurants in America.

– But your company has also become involved with gyro products. Are you happy with gyro sales? What are the prospects for this product in America?

– Over the last 12 years, Loumidis Foods has also invested in the production and distribution of meat products, particularly the gyro. It produces the MFG (My Favorite Gyro) range of products in the U.S. based on traditional recipes, and is currently one of the most significant distributors in the Greater New York and New Jersey areas.

– Do you also offer other products under the “Loumidis” brand name, besides coffee?

– This is another goal that our company will be pursuing over the next years. For the time being, food products such as olives, peppers, pickles, etc. are marketed under the “Loumidis” brand name.

– What is the objective, and what are the next steps for Loumidis Foods?

As Jason and Kimon Loumidis explained to us, after the reorganization and relocation from Astoria to New Jersey, the company is now ready for the next step, which is the wider U.S. market and acquainting the American consumer with the indisputable quality of Greek products. 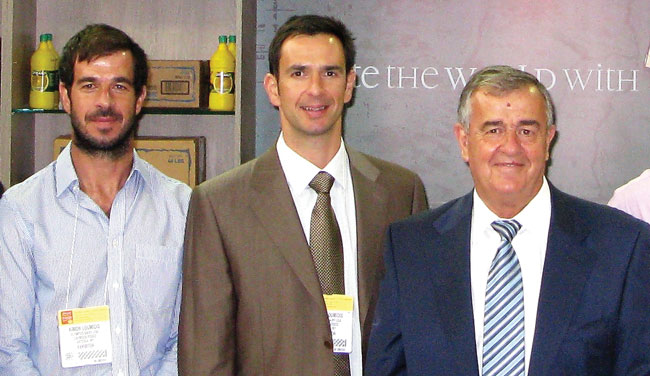 Sotiris Loumidis, right, with his sons, both in business with him, Kimon, left, and Iason.

Restaurants will be the initial target. From there, each chef will evaluate the quality and potential of Greek products, while the consumer will recognize the superiority of Greek flavors by tasting Greek recipes.

– What role can the restaurants owned by Greek-Americans play in the consumption of the imported goods?

– It would be good if Greek restaurants, which in our opinion are the living, breathing ambassadors of Greece, would mention the Greek origin of the products on their menu, as well as be bold enough to introduce more Greek recipes beyond the customary Greek salad. The same applies to Greek-owned family restaurants, diners, etc. We believe and would like to stress once again that Greek restaurants play a very important role in the dissemination and establishment of the Greek name in the food sector.

At the same time, we have launched a major effort to promote, expose and establish Greek branded standardized products in the wider U.S. market with very encouraging and optimistic results. Tastings, free sample distribution, and special seasonal prices, are just some of the promotional actions carried out at specific American food chains.

To note some examples, OLYMPUS dairy products (feta, goat and kasseri cheeses) are carried by major chains, specifically Shaws, Market Basket and Central Market, and the products of My Greek Meze by PALIRRIA (“dolma” stuffed vine leaves, beans, eggplant, chickpeas) can be found at Meijer, Shaws, HEB, Safeway and Acme. Of course, almost all of our products can also be found in smaller American gourmet stores, delis, etc.

– In the June issue, Estiator proposes the creation of a promotional organization for imports under the name “Greek Imports Association.” What do you think of this idea?

– From the very first moment that we started to operate in America, we felt it was necessary for such an organization to be created. More specifically, we had discussed this idea with the respective commercial attachés, but to no avail. Let us hope that your magazine and you personally will take the lead on such an effort. We are willing to help.

As the two brothers pointed out, the experience gained by Loumidis Foods in over 26 years of operation in America has shown that persistence and patience are the prerequisites for any Greek effort, whether private or state. However, the only path to achieving, albeit in the long term, the proper exposure and recognition that Greek products rightfully deserve is for Greek export companies, Greek-American import companies, government agencies in Greece, the consular authorities in the U.S. and the media outlets to be coordinated and to join forces.

– What is the potential for such an effort to be successful?

– It is not an easy effort, and the difficulties and problems we face as an import company are substantial. The instability observed in the exchange rate between the euro and the dollar forces us to constantly differentiate our sales prices. The intense and sometimes dishonest competition from products with a Greek name which originate from other countries (Kalamata olives or Kalamata-type olives) and in general the use of the Greek name for inferior products from other countries (Greek-type Feta) is a serious problem.

In recent years, Greek food and the Mediterranean diet have been highly valued by the American consumer, especially with the unprecedented appeal of Greek strained yogurt, and it is up to us to take advantage, to everyone’s benefit, of this momentum in order to achieve even more positive results.

We concluded the very interesting conversation and wished the Loumidis family strength and success in their efforts. After 26 years of operation in the U.S. market, the Loumidis company is rightfully considered to be one of the best “ambassadors” of Greek foods.


Our site uses cookies and other technology to improve your experience and our services, and to analyze the use of our website. To learn more about our use of cookies, please see our Privacy Policy.AcceptRead more